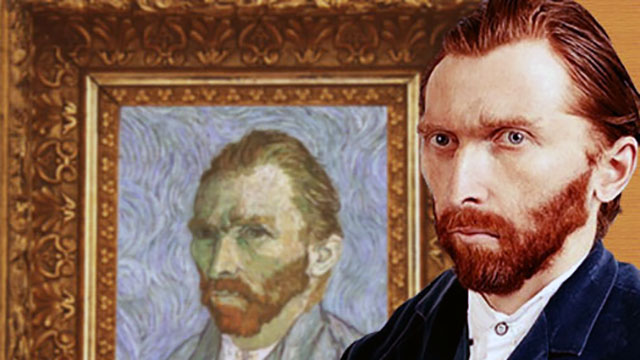 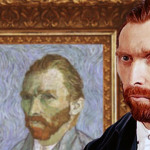 Lithuanian photographer and artist, Tadao Cern, created an interesting substitute for those who would like to see an actual, historical photograph of Vincent Van Gogh. Based on one of Van Gogh’s last self-portraits, Cern produced an intriguing digital simulation of a photograph of Van Gogh, a kind of digital Ersatz photograph, if you like.

Cern’s image is both hyper-real and fictional. It belongs to the domain of the hyperreal by mimicking the appearance of a high resolution color (!) photograph, a technology that did not exist during Van Gogh’s lifetime.

As a digital simulacrum of a photograph of Van Gogh in the same pose as he appears in one of his most iconic self-portraits, Cern’s image goes far beyond Van Gogh’s paintings in detail and apparent realism. However, it achieves its realistic appearance without actually being a photograph, at least not in the traditional conception of photographic images.

It is the respresentation of a hypothetical likeness of Van Gogh, masquerading as a photograph and its implied warrant of an objective, mechanical rendering of the real. Disorienting and fascinating at the same time, the work presents a spectacular, eye-catching simulation of what a photograph of the famous painter might have looked like. As such, it presents a version of a forensic hyperreal fictionalism. 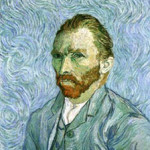 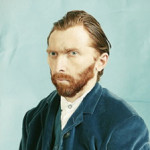 The title of Cern’s digital media work, Revealing the Truth, suggests a rather misleading interpretation of Cern’s enchanting phantasmagoria as somehow presenting a “truth” that is hidden or obscured in Van Gogh’s own painting. As a digital reconstruction, Cern’s image reverses the familiar trajectory found in paintings that are based on (and painted from) a photograph. Cern’s work follows the opposite trajectory, the simulation of a photograph based on a painting. However, the image remains a digital representation without an actual referent — no known and indisputable photograph of Van Gogh exists, so whatever we take Cern’s image to depict or represent, it is not a photograph of the historical Vincent Van Gogh.

The image Cern selected is one of the last three self-portraits that Van Gogh painted before his death in February of 1890. It was painted in Saint-Rémy in September, 1889, a few months after the incident in which Van Gogh cut off part of his left ear and handed it to a prostitute. Van Gogh, suffering from severe hallucinations and delusions, committed himself to the Asylum at St.Paul-de-Mausole.

Van Gogh’s piercing and troubled gaze in his self-portrait supports the popular interpretation of Van Gogh as a tragic, bipolar genius — a classic modern romantic artist hero. It seems that we “recognize” Van Gogh in the portraits without having ever seen or met him.

On Petapixel.Com, Cern described the process behind his work:

“I recreated one of the most famous Vincent Van Gogh self portraits as a photography using DSLR and ‘some’ Photoshop tricks. The idea came spontaneously – I saw my friend that has ginger hair and beard and thought that it would be very funny to make a portrait of Vincent Van Gogh. He liked the idea and a week later we met in my studio. After some preparation work we made few shots and after a day of editing the final image I posted it on the Internet. At the moment I have no plans to make something similar but who knows:) I think that this only one image stand quite good for himself as a project already. Funny that a lot of people are confused by the image. Some of them keep asking me if there’s really a guy that looks so alike Van Gogh. Some of them don’t believe that it’s a photo at all. And some of them thought that I really took a picture of Vincent Van Gogh. The accuracy of the recreation is amazing” (Tadao Cern on petapixel.com).

Without doubt, the constructed figure of Vincent Van Gogh is iconic in contemporary popular culture. Van Gogh is one of the early pop-stars of modern art. The large numbers of popular reproductions of his self-portratis and the re-enactments of his life in film and television support the assumption that Van Gogh would be recognized if he were to appear somewhere in person, say on Melrose Avenue in Hollywood (like Elvis, Marilyn or Jesus) people would recognize him, ask him for autographs, tell him how much they love his paintings, propose marriage.

Less concerned with objective visual representations, but with defining and exploring a way of seeing the world, Van Gogh’s paintings abandon the ontological status of a trace or inscription of the real (the photograph) for a transformative interpretation, a transformative encoding of the visually “real” of the world into a unique, individual, subjective style that nevertheless preserves the moment of (objective) recognition.

As mesmerizing and stunning as Cern’s work may be at first sight, it never leaves the domain of the spectacular. The image trades on the popular fascination with the mythological narrative of the haunted, near-mad but inspired and tragic genius. However, apart from a good amount of Photoshop virtuosity, Cern’s digital simulation remains without any trace of conceptual substance or critical reflection.

The “objective realism” associated with photographic imagery, even in Cern’s hyperreal implementation, is of course much easier to obtain than Van Gogh’s highly personal and subjective presentations of “reality.” Van Gogh’s paintings offer a distinctive and individual mode of visual presentation and communication. Photographic images, on the other hand, present the vision of machines.Photographs often show what the unaided human eye cannot see, but they can only see (record) what is real. Cern’s simulated photograph proposes that a machine can see what is imaginary. It is this underlying contradiction that generates the mesmerizing tension in Cern’s image.

More of Cern’s work can be found at tadaocern.com

This story first appeared on digitalsouls.com on Apr.20, 2013

Language can become a screen which stands between the thinker and reality. This is the reason why true creativity often starts where language ends.