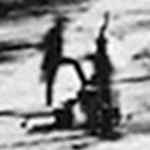 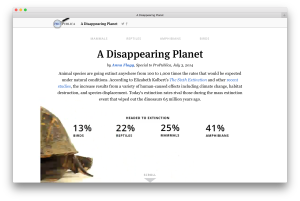 The subtly designed A Disappearing Planet by freelance data journalist Anna Flagg reveals the extinction rates of animals, caused by a variety of human-caused effects, including climate change, habitat destruction and species displacement.

“… when you are actually challenged to think of pre-Darwinian answers to the question ‘What is Man?’ ‘Is there a meaning to life?’ ‘What are we for?’, can you, as a matter of fact, think of any that are not now worthless except for their (considerable) historic interest? There is such a thing as being just plain wrong and that is what before 1859, all answers to those questions were.” (Richard Dawkins, The Selfish Gene, p. 267)

Biocentrism is dead for the same reason geocentrism is dead for the same reason all of our prescientific theories regarding nature are dead: our traditional assumptions simply could not withstand scientific scrutiny. All things being equal, we have no reason to think our nature will conform to our prescientific assumptions any more than any other nature has historically. Humans are prone to draw erroneous conclusions in the absence of information. In many cases, we find our stories more convincing the less information we possess! [1]. So it should come as no surprise that the sciences, which turn on the accumulation of information, would consistently overthrow traditional views. All things being equal, we should expect any scientific investigation of our nature will out and out contradict our traditional self-understanding. 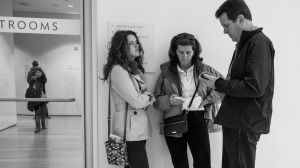 As our smartphones make it easier to connect with people across the globe, they often can make it harder to connect face-to-face.

London-based photographer Babycakes Romero doesn’t own a smartphone. Instead, he treks along in his beloved city, camera in hand, capturing whatever catches his eye. “As a person dedicated to observation, I just feel I would be missing too much of the world around me if I was staring into the palm of my hand the whole time,” he says.

Galileo and other troublemakers aside, science and religion didn’t have such a complete falling out until the 19th century. It was roughly 200 years ago when researchers started regularly digging up archaeological and paleontological evidence that dated the Earth far earlier than Genesis suggested, and then a man named Darwin was publishing some troubling suggestions on the evolution of life in his 1859 The Origin of Species. But that didn’t mean the sides of belief and reason completely split in two. There were those who tried for a middle ground.

One of the forgotten natural theology books to come out of this era was God in Nature and Revelation (1875) by Reverend J. M. Woodman, published in the United States by J.G. Hodge & Co. It proclaims itself a “teacher of natural, mental, and moral philosophy, of natural and revealed religion” on its title page, joined by an illustration of Jesus standing on the planet alongside encircled by man and beast alike. Throughout the text are links between the Bible and the scientific formation of the world, but questionable connections aside, the accompanying images are surprisingly intriguing. The world is shown as a repeating orb, changes in the rise and fall of the oceans and the sediments shaded in, all the while the sun never stops glaring down on the proceedings as a constant reminder of a holy influence. It’s the Victorian romanticizing of science and nature colliding with religion.

PARIS — Following on the heels of the Jean Dupuy and Robert Filliou gallery exhibitions, a third radical Fluxus-related artist is receiving a museum-quality gallery show in Paris: Wolf Vostell. Vostell was a German who, as an art student in Paris, was co-initiator of the European wing of the Fluxus art movement in the late 1950s and founder of the European Happening scene based in Cologne.

Conventional wisdom stipulates that upon seeing a wild bear, one should not go near said bear. One should also avoid taking a picture of oneself with said bear.

Visitors to Lake Tahoe this month laugh in the face of conventional wisdom, though. The number of visitors attempting to take selfies with bears in the area has caused the U.S. Forest Service to issue a statement requesting that visitors keep a safe distance from the animals.

Photographs really are experience captured, and the camera is the ideal arm of consciousness in its acquisitive mood

Stay in touch! Select your prefered email frequency and click to send. Digital Souls News will arrive in your inbox.

This website uses cookies to improve your experience while you navigate through the website. Out of these, the cookies that are categorized as necessary are stored on your browser as they are essential for the working of basic functionalities of the website. We also use third-party cookies that help us analyze and understand how you use this website. These cookies will be stored in your browser only with your consent. You also have the option to opt-out of these cookies. But opting out of some of these cookies may affect your browsing experience.
Necessary Always Enabled

Any cookies that may not be particularly necessary for the website to function and is used specifically to collect user personal data via analytics, ads, other embedded contents are termed as non-necessary cookies. It is mandatory to procure user consent prior to running these cookies on your website.