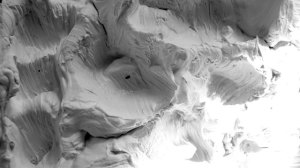 The microscopic particles were developed by myriads of voices. They make you feel the vitality as if lives are flowing over, and after a while, you will realize you are being covered by them, as if sinking into the deep psyche. Then, as if they correlate with the millions of flowing lives and nature in this world, reflecting and blending, we will eventually be touching the shared particles which connect all of us.

This work was composed using microphones that enable the recording of inaudible “over 20kHz” ultra-high frequencies, and using recording equipment,transmitting them to sampling frequencies of 96kHz/24bit format, to output the elements of ultra-high frequencies included within the voice. By layering over 5000 of these voices, they blend organically, and form the sound creation called “Yusei” which is one of a kind, made just of voices.

It is a composition where people can feel beyond their territories of consciousness, a kind of feeling as if everything is connected and shared. This is produced by his original method of using the senses of imperceptible, ultra-high frequency waves contained within the voice, and the shared musical feelings of live multiplex voices.

tmymtur explores creating music that enables the conducting of “truth” into the depth of the heart. It is brought to this point by his original method of using senses of imperceptible, ultra-high frequencies contained within the voice and the shared musical feelings of live multiplex voices.

tmymtr is constructing a sound system at Asahi Art Square that will allow transmissions of ultra-high frequencies over 20kHz (above the audible bandwidth). His hope is to demonstrate a sound-art performance there, to create a “sound space” where people can subconsciously feel something, such as everything being connected and shared by the sound creation “湧声 (Yusei)”.

This story first appeared on digitalsouls.com on Feb.3, 2013

Language can become a screen which stands between the thinker and reality. This is the reason why true creativity often starts where language ends.